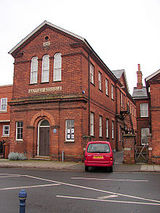 Description:
The British and Foreign School Society (BFSS) offers charitable aid to educational projects in the UK and around the world by funding schools, other charities and educational bodies. In the 19th century it supported free British Schools and teacher training; it continued in the latter role until the 1970s.

As its teacher training colleges have closed and the Society has gathered more capital, it has used its funds to provide grants for educational projects around the world. Details of its activities can be found on its website at and in its Annual Reports which can be accessed on its website.

The Society's Archive Centre is on Brunel's Runnymede Campus. This holds school and college records, together with artefacts and curriculum materials with relevance to modern education.

Joseph Lancaster's School in Borough Road, Southwark, London, established in 1798, was an important development in the provision of universal free education for children. A...
Read More