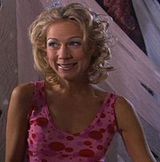 Description:
Bunny (played by Patricia Zentilli) is a character in the sci-fi TV show Lexx.

Bunny first appeared in season 3 as a resident of Gametown on the planet Water. Like all people on the planet Water, she wasn't born, but rather "woke up" one day as an adult. After waking up, Bunny played games every day (as did all residents of Gametown) until the arrival of the Lexx crew. Gametown was destroyed by invaders from the planet Fire and Bunny fled in a moth with the Lexx crew. She was killed later in season 3, by being thrown into a sea of lava by Fifi as the balloon they were in was losing height.

In season 4, Bunny "wakes up" for a second time on the planet Earth, this time with a more ditsy personality. She becomes the first lady to President Reginald J. Priest after his first wife is killed by Isambard Prince. When Earth is eventually destroyed, Bunny escapes with Priest and Prince on a spacecraft built by Dr. Ernst Longbore.

Patricia Zentilli also appeared in the season 2 episode "Wake the Dead" as Laleen, who was killed by Kai in the same episode. Since the inhabitants of the planets Water, Fire and Earth are all reincarnations of people who previously died, it is likely that Bunny and Laleen are the same person. Zentilli also appeared as one of the singers in the Lexx musical episode Brigadoom, although, as the singers were strange, ghost-like creatures, it is unknown if this appearance was intended to be one of Bunny's incarnations or not.