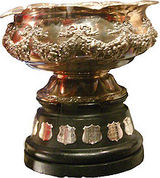 Description:
The Canadian Amateur Hockey League (CAHL) was an early men's amateur hockey league founded in 1898, replacing the organization that was formerly the Amateur Hockey Association of Canada before the 1898–99 season. The league existed for seven seasons, folding in 1905 and was itself replaced by the Eastern Canada Amateur Hockey Association. Formed because of a dispute between teams of the former league, it further developed the sport in its transition to professional, with a growing focus on revenues. The CAHL itself would fold over a dispute, leading to a new league.

The annual meeting of the Amateur Hockey Association of Canada (AHAC) was held in Montreal on December 10, 1898, and was reported as "a cataclysm in the hockey world."

At the previous year's meeting, the application of the Ottawa Capitals to join was declined. In 1898, the Capitals had won the intermediate championship and applied again for AHAC membership. The AHAC executive then voted in favor of admitting the Capitals for league membership. This led to the representatives of the Quebec, Montreal Victorias and Ottawa clubs opting to withdraw from the association. The representative of the Montreal Hockey Club asked the group to reconsider but was declined, after which point Montreal also withdrew.

The withdrawing teams then met at the Windsor Hotel the same day. A representative of the......
Read More