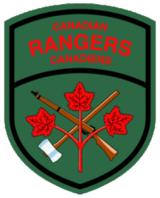 Description:
The Canadian Rangers (often mistakenly called the Arctic Rangers) are a sub-component of the Canadian Forces reserve that provide a military presence in Canada's sparsely settled northern, coastal, and isolated areas. Formally established on May 23, 1947, a primary role of this part-time force is to conduct surveillance or sovereignty patrols (SOV PATS) as required. Some Canadian Rangers also conduct inspections of the North Warning System (NWS) sites and act as guides, scouts, and subject matter experts in such disciplines as wilderness survival when other forces (such as Army units of the Regular Force or Primary Reserve) are in their area of operations. The Canadian Rangers are a volunteer force made up of Inuit, First Nations, Métis and non-Aboriginals; however, it is a common misconception that the organization is a First Nations entity. The ethnic make-up of the numerous patrols across Canada is entirely an accident of geography. Canadian Rangers are paid according to the rank they hold within their patrol and when present on operations or during training events. They are expected to be mostly self-reliant regarding equipment. However, they are provided with uniforms, weapons and a small amount of patrol-level stores (mostly camp stores - tents, stoves, lanterns, axes, etc.). They are reimbursed for the use of personal vehicles and equipment and are paid for this use according to the nationally-established equipment usage rates. Items that a Canadian Ranger could be...
Read More