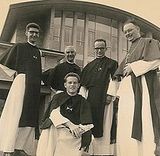 Canons Regular Of The Order Of The Holy Cross

Canons Regular of the Order of the Holy Cross

Description:
The Canons Regular of the Order of the Holy Cross, commonly called Crosiers, are a Roman Catholic religious order.

According to their own tradition, the Crosiers were founded by five men attached to the household of the prince-bishop of Liege, Radulf von Zähringen, who accompanied the Emperor Frederick Barbarossa on the Third Crusade (1189–1191). Upon their return, the five, led by Theodorus de Cellis (1166-1236), sought a new way of life, and shortly before his death, their bishop appointed them to be canons of his Cathedral of St. Lambert in Liège. After efforts to renew the life and practice of the college of canons to which they belonged, the five withdrew from Liege and moved up the Meuse river to a place called Clairlieu, outside the city of Huy, and began a way of life more in keeping with their ideals. This settlement of the five at Huy was the beginning of their Order, and the house and small church dedicated to Saint Theobald that they established there became the Order's motherhouse. Pope Innocent III verbally approved their Order on the feast of the Finding of the Holy Cross, May 3, 1210, and Pope Innocent IV granted them full and final approval in 1248.

This traditional story is, however, rife with difficulties, largely of the Crosiers' own making. In 1410, the Crosiers' general chapter (see below) ordered the destruction of its records and decisions from the time of its foundation. The reason for...
Read More