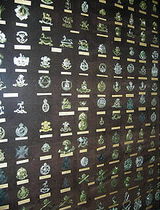 Description:
A cap badge, also known as head badge or hat badge, is a badge worn on uniform headgear and distinguishes the wearer's nationality and/or organisation. The wearing of cap badges is a convention commonly found among military and police forces, as well as uniformed civilian groups such as the Boy Scouts, civil defence organizations, paramedical units (e.g. the St. John Ambulance Brigade), customs services, fire services etc.

Cap badges are a modern form of heraldry and their design generally incorporates highly symbolic devices.

In the British Army (as well as Commonwealth armies) each regiment and corps has its own cap badge. The cap badge of the QRL is called a motto by those within the regiment that of the Royal Horse Artillery is known as a cypher and that of the Coldstream Guards is known as a Capstar. The concept of regimental badges appears to have originated with the British Army. The Encyclopædia Britannica's 1911 Edition notes that although branch badges for infantry, cavalry and so on were common to other armies of the time, only the British Army wore distinctive regimental devices.

Plastic cap badges were usually introduced during a prolonged war (e.g. the Second World War) when metals became strategic materials. Nowadays many cap badges in the British Army are made of a material called "stay-brite" plastic because it is cheap, flexible and does not require as much maintenance as the brass...
Read More