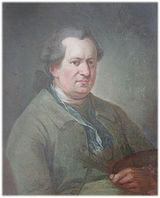 Description:
Carl Gustaf Pilo (5 March 1711&nbsp;– 2 March 1793) was a Swedish-born artist and painter, one of many 18th century European artists who had to leave their own country in order to make a living. Pilo worked extensively in Denmark as a painter to the Danish Court and as professor and director at the Royal Danish Academy of Art (), as well as in his native Sweden. Carl Gustaf is most famous for his masterly painting, "The Coronation of Gustaf III" commissioned by King Gustav III of Sweden.

Early information about his career contains many inconsistencies, on account of disagreements between two sources contemporary with his life. In spite of his father's protests Carl Gustav chose to be educated as a painter instead of receiving a book education. He probably received his early training from his father, who had earned his living as a young man as a decorative painter at Drottningholm and Stockholm Palace, although other indications say that he was trained by a painter named Crisman in Stockholm, Sweden. Training for Pilo would have begun in Stockholm as early as 1723.

Pilo’s career began as a craft painter. He became an apprentice in 1731. According to Anton Friedrich Büsching (1754) Pilo traveled through Germany to Vienna 1734-36; this however is contradicted by Thure Wennberg (1794)...
Read More