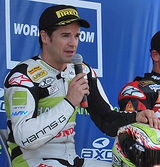 Description:
Carlos "Charlie" Checa (born October 15, 1972 in Barcelona, Spain) is a professional motorcycle road racer. After racing in 500cc and MotoGP for over a decade, mostly on Honda and Yamaha machinery with and without full manufacturer support, he moved to the Superbike World Championship on a Honda for . He has two Grand Prix victories. He has a younger brother, David Checa, also a motorcycle racer who competed in the Superbike World Championship for .

Checa made his debut in 125cc and 250cc motorcycle racing in for Honda. In , he moved up to the Blue Riband 500cc class as a replacement for Alberto Puig, a fellow Spaniard who broke both his legs in a horrifying crash in France. Checa shocked the paddock by being on the pace and nearly winning the Barcelona race.

He continued with the team until 1998, the year he suffered near fatal injuries with a crash at Donington Park. He crashed at Craner Curves and was initially thought to have suffered only scrapes and bruises before complaining of pain. Hours later he had lost his vision, needed emergency surgery to remove his spleen and was listed in critical condition. He fought back to ride that year, missing just one race, before racing for Yamaha as Max Biaggi's team mate on two and four-strokes. He nearly won many races but unfortunately crashed after taking the lead. One such race was at Rio de Janeiro in 2002 when he stalled on the starting line then, came...
Read More