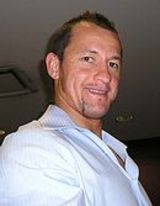 Description:
Carlos James Spencer (born 14 October 1975 in Levin) is a New Zealand rugby union footballer who currently plays at fly-half (first five-eighth) for the Lions in the Super 14 and formerly for the New Zealand All Blacks. He has signed to play for the Lions for 2010 and 2011.

He has generally specialised in the position of Fly-half AKA first five-eighth number 10 though he has also played fullback number 15 at national and international levels.

Spencer first rose to prominence when he starred alongside Christian Cullen in a Ranfurly Shield challenge in 1991, playing for the Horowhenua team against Auckland. Auckland coach Graham Henry spotted Spencer's talent and recruited him to play for the Auckland team.

Early in 2007 Spencer was linked with a move away from Northampton at the end of the 2006-07 season. However, Spencer soon committed his loyalty to the Saints. Carlos Spencer then had a marvellous season marshalling a weakened Saints outfit back into the Premiership. He spent time at Fullback early in the season as the new Saints' coaches attempted to build up the...
Read More