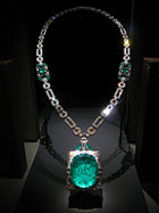 Description:
Cartier S.A., commonly known as Cartier (, ), is a French luxury jeweler and watch manufacturer. The corporation carries the name of the Cartier family of jewellers whose control ended in 1964 and who were known for numerous pieces including the "Bestiary" (best illustrated by the Panthère brooch of the 1940s created for Wallis Simpson), the diamond necklace created for Bhupinder Singh the Maharaja of Patiala and in 1904 the first practical wristwatch, the "Santos." Cartier SA is headquartered in Paris.

The company has a long and distinguished history of serving royalty, as well as stars and celebrities. One Prince of Wales hailed Cartier as "Joaillier des Rois, Roi des Joailliers" (Jeweller to Kings, King of Jewellers"). Cartier received an order for 27 tiaras for the coronation of the future British King. King Edward VII was crowned in 1902 and in 1904 he honoured the Company with the Royal warrant of supplier to the Royal Court of England. Similar warrants soon followed from the courts of Spain, Portugal, Russia, Siam, Greece, Serbia, Belgium, Romania, Egypt and finally Albania, and also from the House of Orleans and the Principality of Monaco.

Under the Cartier family

Cartier was founded in Paris in 1847 by Louis-François Cartier when he took over the workshop of his master. In 1874, his son Alfred Cartier took over the administration of the company, but it was...
Read More