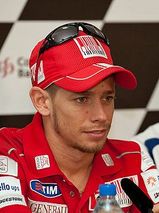 Description:
Casey Stoner (born 16 October 1985) is a professional motorcycle racer. Born in Kurri Kurri, New South Wales and raised in Southport, Queensland, Stoner raced from a young age and moved to the United Kingdom to pursue a racing career. After first competing internationally in 2002, he won the title of 2007 MotoGP World Champion when he succeeded American Nicky Hayden. He currently competes in the MotoGP class for the Repsol Honda Team, having also competed for Team LCR and Ducati Corse with which he became world champion since his MotoGP début in .

In 2008, Stoner was named Young Australian of the Year.

He competed in his first race was when he was four years old, in an under-nine years old race at the Mike Hatcher's dirt racing track on the Gold Coast of Australia. Between his very first race win at the age of nine and the age of fourteen, Stoner won 41 dirt and long track titles and 70 state titles.

One feat he achieved that illustrates his passion and "need" for racing was at age twelve. Over one weekend he raced in 5 different categories in all 7 rounds of each capacity. A weekend consisting of 35 different races... Not only did he compete in all these categories and different engine capacities, the young Casey Stoner went on to win 32 out of the 35 races. There were five Australian titles to be won that weekend, Stoner...
Read More