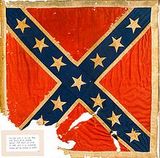 Description:
The Cavalry Corps of the Army of Northern Virginia was the only organized cavalry corps in the Confederate Army during the American Civil War. Prior to the establishment of a formal corps, cavalry organization in the Confederacy consisted mostly of partisan ranger units and some battalions, a few of which were loosely organized into regiments, such as Brig. Gen. Turner Ashby's regiment, and Colonel J.E.B. Stuart's 1st Virginia Cavalry Regiment.

The source and essence of the Cavalry Corps lay in the background of the age of the Virginia Cavaliers, the royal families of the Colony of Virginia who brought the breeding of horses and horsemanship to the colony. Fine horsemanship was an ingrained part of Virginia culture and history, and many Virginians were raised riding and breeding horses, and thus were capable of jumping and military skills on the horse that were unequaled by Union cavalry during the war.

The rise of the Cavalry Corps can be almost entirely tied to the career and organizational efforts of its first commander, Maj. Gen. J.E.B. Stuart, and was formally established on August 17, 1862. Stuart's command increased in size as part of the history of the Cavalry Corps, as he commanded a brigade, and then a division of cavalry, which finally grew in size to a complete corps. Key engagements of the Cavalry Division/Corps under Stuart's leadership included: