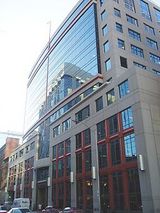 Description:
The CBC Ottawa Broadcast Centre is located on Sparks Street in downtown Ottawa, Ontario, Canada and is home to the head office of the Canadian Broadcasting Corporation and the CBC's various English and French language operations in the National Capital Region. The building was opened in 2004, and contains approximately 37,700 square metres (270,000 square feet) of office space.

Previously, the CBC operated out of various buildings throughout the city. The radio division occupied the sixth floor of the Château Laurier hotel, while the television division operated out of a building in the Westboro neighbourhood. The CBC's Parliamentary Bureau operated out of the National Press Building on Wellington Street and the Booth Building on Sparks Street. The CBC head office previously occupied the Edward Drake Building in Ottawa south, but budgetary cutbacks in the 1980s and 1990s led to the sale of that building and to a drastic downsizing of the head office staff. Prior to the opening of the Broadcast Centre, the remaining head office staff shared space with the television operations in the Westboro building.

The Ottawa Broadcast Centre was built by and is owned by Morguard Investments. Not all of it is leased by the CBC, with the top floors occupied by the House of Commons administration (Information Services). It is located at 181 Queen Street, between Bank Street and O'Connor Street. The rear of the building backs out on the Sparks Street pedestrian mall. The site had been...
Read More