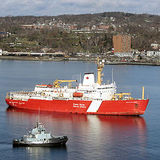 Named after the twelfth Prime Minister of Canada, The Right Honourable Louis St. Laurent, PC CC QC LLD DCL LLL BA. The vessel is classed a "Heavy Arctic Icebreaker" and is the largest icebreaker and flagship of the CCG. It carries a polar class of PC-1.

Built in 1969 by Canadian Vickers Ltd. in Montreal, Quebec, CCGS Louis S. St-Laurent underwent an extensive and costly modernization at Halifax Shipyard Ltd. in Halifax, Nova Scotia between 1988-1993 which saw her hull lengthened as well as new propulsion and navigation equipment installed.

The modernization program was controversial as the government of Prime Minister Brian Mulroney had initially proposed building a class of mega icebreakers (the Polar 8 Project) for promoting Canadian sovereignty in territorial waters claimed by Canada; the had made an unauthorized transit of Canada's Northwest Passage in 1985 early in Mulroney's administration, provoking a strong nationalist out-cry across the country. However, budget cuts in the late 1980s saw proposed expansions of the coast guard and armed forces scrapped. In compensation to the coast guard, the government opted to modernize the largest icebreaker in its fleet, the CCGS Louis S. St-Laurent.

She was based at CCG Base Dartmouth in Dartmouth, Nova Scotia for a large majority of her career, but has recently been transferred to St. Johns, Newfoundland and Labrador. The vessel's current operation tempo...
Read More