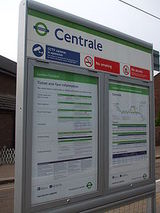 The stop operates as a transport interchange with trams stopping on one side of the platform and local buses on the other. It operates, along with West Croydon and East Croydon as Tramlink interchanges within the 'Croydon Loop'.

Just on the other side of the road is the Centrale, there is an entrance for the main centre and also the Mecca Bingo which owns the only business on the Tamworth Road level.

On 2 April 2004, The new Centrale shopping centre opened in Central Croydon. It included a new 1000 space car park, which entrance was nearby to the current stop. A tram stop was planned to be built as part of the building of the shopping centre, but trams went straight through this station until 10 December 2005 mainly due to rises in the construction cost of the stop and the worry that adding approximately 45 seconds onto tram journeys through Central Croydon would disrupt the timetable and additional trams would have to be added. However, when the tramstop did open, there were insignificant timetable disruptions and no new trams were added.