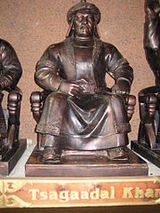 Description:
Chagatai Khan (, Tsagadai; c. 1185–1241 or 1242) was the second son of Genghis Khan and first khan and origin of the names of the Chagatai Khanate, Chagatai language and Chagatai Turks.

The true founder of the state was Chagatai's grandson Alghu. The state was much less influenced by Islam than the Ilkhanate to the southwest, but there were Muslims within the state and some did convert. However, they kept to old nomadic traits much longer. Some historians have said this was a major reason for the decline in urbanism and agriculture in this area which is known to have occurred. The first ruler who actually converted to Islam was Mubarak-Shah (note the Arab name). His conversion occurred in 1256. However, this was very problematic because in less than 30 years other rulers would renounce Islam and return to older beliefs, although Tarmarshirin converted to Islam and tried to turn the dynasty back toward Islam. His conversion provoked a huge backlash from nomadic groups in the eastern part of the realm who eventually killed him in 1334. After his...
Read More