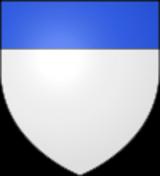 Description:
In heraldry, a charge is any emblem or device occupying the field of an escutcheon (shield). This may be a geometric design (sometimes called an ordinary) or a symbolic representation of a person, animal, plant, object or other device. In French blazon, the ordinaries are called pièces while other charges are called meubles (i.e. "mobile"; this is a homonym of "furniture" in Modern French). The division of charges into "ordinaries", "sub-ordinaries" and other categories is a relatively modern practice that has been deprecated, and these terms much pejorated, in the writings of Fox-Davies and other heraldry authors.See "CHAPTER IX: THE SO-CALLED ORDINARIES AND SUB-ORDINARIES" in Fox-Davies (1909) A Complete Guide to Heraldry. The particular significance or meaning of a charge may be indicated in the blazon, but this practice is also deprecated.

The term charge can also be used as a verb; for example, if an escutcheon bears three lion, then it is said to be charged with three lions; similarly, a crest or even a charge itself may be "charged", such as a pair of eagle wings charged with trefoils (e.g. Coat of arms of Brandenburg). It is important to distinguish between the ordinaries and divisions of the field, as these typically follow similar patterns, such as a shield divided "per chevron", as distinct from being charged with a chevron.

While thousands of objects found in nature,...
Read More