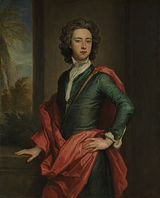 Description:
Charles Beauclerk, 1st Duke of St Albans, KG (8 May 1670 &ndash; 10 May 1726) was an illegitimate son of King Charles II of England by his mistress Nell Gwynne.

On 21 December 1676, a warrant was passed for "a grant to Charles Beauclerc, the King's natural son, and to the heirs male of his body, of the dignities of Baron of Heddington, co.Oxford, and Earl of Burford in the same county, with remainder to his brother, James Beauclerc, and the heirs male of his body." A few weeks later, James was given "the title of Lord Beauclerc, with the place and precedence of the eldest son of an earl." Just after the death of Henry Jermyn, 1st Earl of St Albans at the turn of the year, on 5 January 1684, King Charles granted his son Charles, Earl of Burford, the title of Duke of St Albans, gave him an allowance of £1,000 a year, and granted him the offices of Chief Ranger of Enfield Chace and Master of the Hawks in reversion (i. e. after the death of the current incumbents). He became colonel in the 8th regiment of horse in 1687, and served with the emperor Leopold I, being present at the siege of Belgrade in 1688.

When his mother died (14 November 1687) Beauclerk received a large estate, including Burford House, near Windsor Castle. After the Battle of Landen in 1693, William III made Beauclerk captain of the gentlemen pensioners, and four years later gentleman of the bedchamber. His father had given him the reversion of the office of Hereditary Master...
Read More