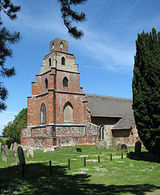 Description:
Captain Charles Cunningham Boycott (12 March 1832 – 19 June 1897) was a British land agent whose ostracism by his local community in Ireland as part of a campaign for agrarian tenants' rights in 1880 gave the English language the verb to boycott, meaning "to ostracise". Boycott's service in the British Army 39th Foot brought him to Ireland, where he later worked as a land agent for Lord Erne (John Crichton, 3rd Earl Erne), a landowner in the Lough Mask area of County Mayo.

In 1880, as part of its campaign for the "Three F's" (fair rent, fixity of tenure and free sale), the Irish Land League under Charles Stewart Parnell and Michael Davitt withdrew the local labour required to save the harvest on Lord Erne's estate and began a campaign of isolation against him in the local community. Neighbours would not talk to him. Shops would not serve him. Local labourers refused to tend his house, and the postman refused to deliver his mail.

The campaign against Boycott became a cause célèbre in the British press after Boycott wrote a letter to The Times about the situation, with newspapers sending correspondents to the West of Ireland to highlight what they viewed as the victimisation of a servant of a peer of the realm by Irish nationalists. Fifty Orangemen from County Cavan and County Monaghan travelled to Lord Erne's estate to save the harvest, while a regiment of troops and over 1,000 men of the Royal Irish Constabulary were deployed to...
Read More