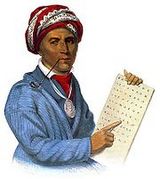 Description:
The Cherokee syllabary is a syllabary invented by Sequoyah to write the Cherokee language in the late 1810s and early 1820s. His creation of the syllabary is particularly noteworthy in that he could not previously read any script. He first experimented with logograms, but his system later developed into a syllabary. In his system, each symbol represents a syllable rather than a single phoneme, the 85 (originally 86) characters in the Cherokee syllabary provide a suitable method to write Cherokee. Some symbols do resemble Latin alphabet's and Greek alphabet's letters, but the sounds are completely different (for example, the sound /a/ is written with a letter that resembles Latin D).

<br>Note: ‘v’ represents a nasal vowel in the chart.

The charts above show the syllabary as arranged by Samuel Worcester along with his commonly used transliterations. He played a key role in the development of Cherokee printing from 1828 until his death in 1859.

The phonetic values of these characters do not relate to those represented by English...
Read More