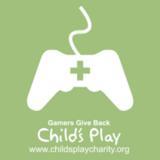 Description:
Child's Play is a charitable organization founded by the authors of the popular computer and video games-based webcomic Penny Arcade that organizes worldwide toy drives to children's hospitals. Mike Krahulik and Jerry Holkins founded Child's Play in 2003 to improve the lives of sick children by donating toys and games to hospitals worldwide. The charity is also seen as a way to refute mainstream media's perception of gamers as violent and antisocial.

With the help of hospital staff, Child's Play volunteers set up gift wishlists on Amazon.com, full of video games, books, toys, and movies. When the hospital's wishlist is completed, they are then added to the map on the Child's Play website. Gamers and others online click through to the lists and buy items for patients. Everything ships directly from Amazon to the hospital. The Amazon links are associate's links, so Amazon pays Child's Play a small commission on each purchase. 100% of that money goes to the hospitals. Instead of buying items off the wishlists users can donate money through PayPal or check. Again, 100% of all donations are distributed to the hospitals, paying for pediatric research, facility improvements, etc. During the month of October, the webmasters of Penny Arcade make a big kickoff announcement, which then gets...
Read More