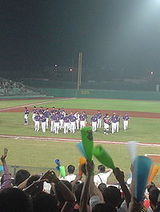 Description:
The Chinese Taipei baseball team (), is the national team of the Republic of China (commonly known as "Taiwan"). It is governed by the Chinese Taipei Baseball Association. They are generally recognized as one of the elite national baseball teams. They are currently the fifth ranked baseball team in the world, just behind South Korea. They have consistently maintained a top position in Asia, with occasional drops, such as after the 2008 Beijing Olympics, and rises in ranking, as after the 2009 Asian Baseball Championship. It has been ranked the second best national baseball team in Asia since the 1970s.

The team is often considered as one of the top three baseball teams in Asia, along with Japan and South Korea. The team comprises amateurs and professionals from Taiwan's Chinese Professional Baseball League, Japan's Central League and Pacific League, and North American major (MLB) and minor leagues. Chinese Taipei is currently ranked 5th in world baseball rankings, and is right behind Japan.

The team has participated in many of the international and regional tournaments and has achieved many successes. It has won six titles in Asian Baseball Championship, a bronze medal at the 1984 Olympic Games...
Read More