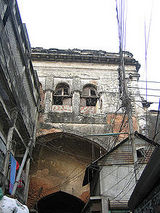 Description:
Choto Katra which means the Small Katra. It is one of the Katra built during Mughal's regime in Dhaka, Bangladesh. It was constructed in 1663 by Subahdar Shaista Khan and the architectural work was done by him. Choto Katra is rectangular in a plan of 101m X 92m. It has two gateways, one to the north and the other to the south. Basically it was built to accommodate some officials and Shaista Khan's expanding family. It has the tomb of Champa Bibi, whose history and identity is mysterious. The small mosque within its boundary has disappeared. Choto Katra is slightly smaller than Bara Katra, but similar in plan and it is about 185 metres east to Bara Katra.

Choto Katra ( Bengali: চত কাতর ) is an historically significant architectural monument situated about 200 yards East of the BARA KATRA at HAKIM HABIBUR RAHMAN LANE on the bank of the river BURIGANGA in OLD DHAKA. It was first established during MUGHAL’S regime in OLD DHAKA, BANGLADESH.

KATRA is a form of cellular dormitory built around an ablong courtyard; the form originated in Persia, and like many other things Persian and middle-Asian that the Mughals introduced in this subcontinent, this was copied in Northern India, the home of some of the rulers, members of the Royal Court and the nobility. However, the term may have been derived from Arabic Katara which meant colonnaded building, or could be a corrupt French word used for a residential quarter. Other synonyms of it are Chuttre (French) and Chatrra...
Read More