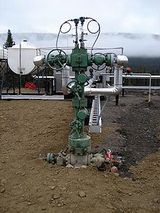 Description:
In petroleum and natural gas extraction, a Christmas tree, or "tree", (not "wellhead" as sometimes incorrectly referred to) is an assembly of valves, spools, and fittings used for an oil well, gas well, water injection well, water disposal well, gas injection well, condensate well and other types of wells. It was named for its crude resemblance to a decorated tree.

Note that a tree and wellhead are separate pieces of equipment not to be mistaken as the same piece. A wellhead must be present in order to utilize a Christmas tree and a wellhead is used without a Christmas tree during drilling operations, and also for riser tie-back situations which would then have a tree included at riser top. Producing surface wells that require pumps (pump jacks, nodding donkeys, and so on) frequently do not utilize any tree due to no pressure containment requirement.

Tree complexity has increased over the last few decades. They are frequently manufactured from blocks of steel containing multiple valves rather than made from multiple flanged valves. This is especially true in subsea applications where the resemblance to Christmas trees no longer exists given the frame and support systems into which the main valve block is integrated.

It is common to identify the type of tree as either "subsea tree" or "surface tree". Each of these classifications has a number or varieties within them. Examples of subsea include conventional, dual bore,...
Read More