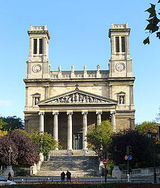 The church was built during 1824-1844, on the site of the ancient Saint-Lazare prison enclosure. In that enclosure had been sited the Maison Saint-Lazare, occupied by Vincent de Paul— it was here that he lived and worked— and afterwards by the Congrégation de la Mission, from 1632 to 1793.

The church's design and the initial phases of its construction were entrusted to Jean-Baptiste Lepère, a French architect of modest reputation. The first stone was laid in August 1824 in the presence of the préfet de la Seine Gaspard de Chabrol and the archbishop of Paris Mgr de Quélen. Work proceeded slowly, and was repeatedly abandoned, being especially delayed thanks to a lack of credit as a result of the 1830 Revolution. Thus it was Lepère's son-in-law, Jacques Hittorff, who finally followed the project through from 1831 to 1844. The building opened for worship on 25 October 1844.Hittorff massively modified the initial plans (which did not plan for even one tower), with his church opening onto the Place Franz-Liszt, giving the building a church square. He also added a system of ramps, laid out today in gardens, to aid access by horse-drawn carriages.