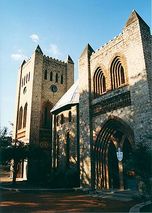 Church Of The Province Of Central Africa

Church of the Province of Central Africa

In 1861, the first Anglican missionary to the area was Bishop Charles Frederick Mackenzie, who arrived with David Livingstone. In 1855, he went to Natal with Bishop John Colenso. They worked among the English settlers till 1859. In 1860, Mackenzie became head of the Universities' Mission to Central Africa and he was consecrated bishop in St George's Cathedral, Cape Town, on 1 January 1861. Following Dr David Livingstone's request to Cambridge, Bishop Mackenzie took on the position of being the first missionary bishop in Malawi (Nyasaland).

Moving from Cape Town, he arrived at Chibisa’s village in June 1861 with the goal to establish a mission station at Magomero, near Zomba. Bishop Mackenzie worked among the people of the Manganja country until January 1862 when he went on a supplies trip together with a few members of his party. The boat they were travelling on, sank and as medical supplies were lost, Bishop Mackenzie’s malaria could not be treated. He died of Blackwater fever on...
Read More