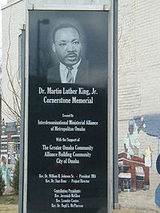 Description:
The Civil rights movement in Omaha, Nebraska has roots that extend back until at least 1912. With a history of racial tension that starts before the founding of the city, Omaha has been the home of numerous overt efforts related to securing civil rights for African Americans since at least the 1920s.

Prior to the formal founding of the civil rights movement in Omaha, several African Americans secured status that was relevant to later struggles. While the Civil Rights Movement proper did not begin until the 1940s, the historical significance of Omaha in securing civil rights for a variety of American people could be said to start in 1876.

That year stands out in the American civil rights movement as Omaha became the location of the pivotal 1876 trial of Standing Bear v. Crook. In that trial a U.S. district court judge at Fort Omaha set U.S. legal precedent by recognising the personhood of Native Americans, thereby granting American Indians the rights of citizens. With Standing Bear, a Ponca chief on trail, local journalist Thomas Tibbles, Omaha Susette LaFlesche and General Crook himself testified on behalf of acknowledging Native American rights. For the first time, a U.S. court had ruled that an Indian was, officially, a person. Standing Bear won the case, securing the right of his tribe to leave their Indian Territory reservation and return to their Nebraska homelands.

The first record of...
Read More