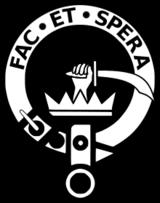 Origins of the clan

The name Matheson has been attributed to the Gaelic words Mic Mhathghamhuin which means Son of the Bear or Son of the Heroes. Traditionally the Clan Matheson descends from a 12th century man called Gilleoin, who is thought to have been from the ancient royal Cenél Loairn (House of Lorne), part of the Scottish Dál Riata kingdom which was established c. 470 by the sons of Erc of Dalriada who was King of Irish Dal Riata in Antrim. The clan has been undertaking DNA tests of male line Mathesons, and there are Matheson males who show the Dalriada DNA signature. The current chiefly line from Lochalsh, Ross-shire is of R1a Viking descent, while the chieftain line from Shiness, Sutherland is of R1b Celtic descent. Another significant group within the clan are the Isle of Lewis Mathesons which show another R1b Celtic DNA signature.

According to tradition the Clan Matheson were among the followers of the King in his wars with the Picts, whom he finally overthrew at the great Battle of Cambuskenneth near Stirling in 838. The Clan Matheson settled around the area of Loch Alsh, Lochcarron and Kintail and gave their allegiance to the Clan MacDonald and the Lord of the Isles.

Kenneth MacMathan, constable of Eilean Donan is recorded in both the Norse account of the expedition of Haakon IV of Norway against Scotland in 1263, and in the Chamberlain Rolls of that year, which culminated in the...
Read More