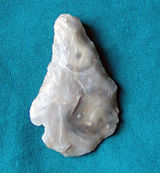 Description:
Clare is a small town on the north bank of the River Stour in Suffolk, England. It is 14 miles from Bury St Edmunds and 9 miles from Sudbury. It lies in the . As a cloth town, it is one of . Clare is the current holder of . It has a cultural exchange relationship with Chatillon-sur-Indre. Clare and its vicinity reveals evidence of man's long habitation throughout prehistory. The historical record demonstrates a community which changes and yet persists across centuries, from the Norman Conquest through religious strife, agricultural upheaval and industrial revolution to the present day.

The town will host one of the very first free schools established by the current government, the .

As part of the Heritage Lottery Funded scheme, in April and May 2011 (ACA) gave residents, school pupils and members of the public the chance to carry out their own small archaeological 'test pit' excavations throughout Clare to find out how the town developed over hundreds - even thousands - of years in the past. Early results indicate the presence of Saxon pottery across many sites - the first evidence of Clare's importance before the Normans.

This area of the country was formed during the Tertiary period, containing some of the youngest rock in the British Isles. Like the vast majority of Suffolk, the surface 'rock' is the very fertile boulder clay or clay loam, lying on top of layers of chalk. The landscape surrounding the Stour Valley is the result of the joint effects of past...
Read More