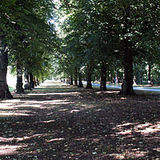 Description:
Clumber Park is a country park in the Dukeries near Worksop in Nottinghamshire, England. It was the seat of the Pelham-Clintons, Dukes of Newcastle.It is owned by the National Trust and open to the public.

Clumber, mentioned in Domesday Book was monastic property in the Middle Ages, but later came into the hands of the Holles family. In 1709 it was enclosed as a deer park by John Holles - 4th Earl of Clare, 3rd Earl of Newcastle upon Tyne and 1st Duke of Newcastle. Clumber house, by the River Poulter at the centre of the park, became a hunting lodge, but two generations later, about 1759, the then heir to the estate, Lord Lincoln, decided to make it one of his principal mansions. Over the next few years, work on the house and park proceeded, under the supervision of a carpenter and builder named Fuller White (although he is likely to have been working to plans from architect Stephen Wright). White was fired in 1767, and Wright took charge of the project, replacing some of the 1760s features in the 1770s. The project was still not complete when Wright died, and some features in and around the park may have been designed by his successor, John Simpson, in the 1780s.Michael Symes, "The Garden Designs of Stephen Wright" Garden History vol. 20, no. 1 (Spring 1992)