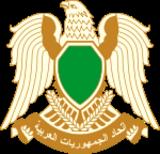 Coat Of Arms Of Libya

Coat of arms of Libya

Description:
As a result of the 2011 Libyan civil war, there are currently two governments claiming to be the de jure government of Libya, an independent state in North Africa. One government is led by Muammar al-Gaddafi and the other is the National Transitional Council.

Coat of used by the Gaddafi government

The coat of arms of the Great Socialist People's Libyan Arab Jamahiriya (), although not exactly the same, remains similar to the one used whilst the country was part of the Federation of Arab Republics. The current coat of arms was adopted upon its exit from the Federation in 1977. The bird of prey shown supporting the green shield in the coat of arms is the Hawk of Quraish, the emblem of the tribe of the prophet Muhammad. The phrase اتحاد الجمهوريات العربية (ittiħād al-jumhūriyyāt al-`arabiyya "Federation (literally Union) of Arab Republics"), is written on the banner clutched in the feet of the hawk.

The National Transitional Council uses a seal to certify official documents. The Emblem depicts a cresent moon and star, represented in the colours of the Libyan flag used by the NTC (red, black, and green), with the names of the council المجلس الوطني الانتقالي (al-majlis al-waṭanī al-intiqālī, "The Transitional National Council") and of the state ‏ليبيا (Lībiyā, Libya) displayed in Arabic and English....
Read More