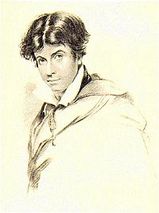 Description:
The "Cockney School" was an alleged group of cockney poets writing in England in the second and third decade of the nineteenth century. The term came in the form of hostile reviews in Blackwood's Magazine in 1817. Its primary target was Leigh Hunt but included John Keats and William Hazlitt. John Scott died after a duel over the controversy.

Each of the writers was derided for a slightly different quality. Keats, for example, was accused of "low diction" for rhyming "thorns/fawns" in "Sleep and Poetry" and other rhymes which suggested a working class speech. Hunt and Hazlitt were similarly vilified for their diction, but the criticisms were more ideological with them than with Keats. John Wilson Croker perpetuated the term "Cockney School" beyond the pages of Blackwood's in 1818 when he attacked Keats's Endymion in the Quarterly Review.

The term, and the campaign against Hunt and the others, was not a question of aesthetics. It was, instead, an attack on the class background of the authors and their aspirations to the highest level of the literati, and it was, additionally, a reaction to the "Cockney" politics of the authors. The political, reformist agenda and the democratic ideology of Hunt and Hazlitt were offensive to the Blackwoods review staff, and the cultural and class background of the authors was introduced as a mechanism. Percy Bysshe Shelley was accused of being similarly offensive politically, but...
Read More