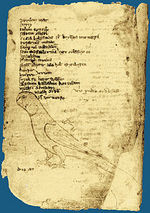 Description:
The Codex Cumanicus was a linguistic manual of the Middle Ages, designed to help Catholic missionaries communicate with the Cumans, a nomadic Turkic people. It is currently housed in the Library of St. Mark, in Venice (Cod. Mar. Lat. DXLIX).

The Codex likely developed over time. Mercantile, political and religious leaders, particularly in Hungary, sought effective communication with the Cumans from the time of their ascendency in the mid-11th century. As Italian city-states such as Genoa began to establish trade posts and colonies along the Black Sea coastline, the need for tools to learn the Kipchak language sharply increased.

The earliest parts of the Codex are believed to have originated in the 12th century or 13th century. It was likely added to substantially over time. The copy preserved in Venice dates from 1330 (July 11, 1330 on fol. 1r; see Drimba, p.&nbsp;35 and Schmieder in Schmieder/Schreiner, p.&nbsp;XIII). The Codex consists of a number of independent works which were ultimately combined under one cover.

Historians generally divide it into two distinct and independent parts:

The first (fol. 1r-55v) is a practical handbook of the Kipchak tongue, containing glossaries of words in vulgar Italo-Latin and translations into Persian and Kipchak. This section has been styled the "Italian Part" or the "Interpreter's Book" of the Codex. Whether the Persian parts came through Kipchak intermediaries or whether Persian was a......
Read More