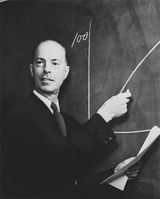 Born in Port Hastings, Nova Scotia, Canada MacLeod entered McGill University at the age of 16 (having skipped three grades in primary school), and completed his medical studies by age 23.

In his early years as a research scientist, MacLeod, together with Oswald Avery and Maclyn McCarty, demonstrated that DNA is the active component responsible for bacterial transformation&mdash;and in retrospect, the physical basis of the gene. In 1941, Avery and MacLeod had separated a crude extract from the pneumonia-causing S (‘smooth’) strain of the bacteria. The S strain extract could convert the far more benign R (‘rough’) strain of pneumocci to the disease-causing S form. Later that year, McCarty joined the Avery laboratory, and in 1942, the group began to focus on DNA as the elusive ingredient in the S strain extract that could transform R pneumococcus into S pneumococcus. By early 1943, Avery, MacLeod, and McCarty had shown that DNA was indeed the transforming principle. In February 1944, the trio published the first of a series of scientific papers in the Journal of Experimental Medicine demonstrating that DNA was the transforming principle. Subsequent experiments confirmed DNA as a universal bearer of genetic information. Despite the scientific importance of this work, which became known as the Avery-MacLeod-McCarty experiment, Avery, MacLeod, and...
Read More