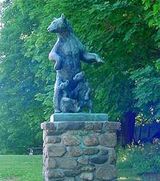 Description:
Collis P. Huntington State Park is a state park in the U.S. state of Connecticut. Characterized by its life-like sculptures of bears and wolves that welcome visitors, Huntington is a setting featuring open fields and dense woodlands. The park was donated to the citizens of Connecticut by the Huntington family. Huntington State Park spreads into three towns: Redding, Newtown, and Bethel. It is composed of of fields and dense woodlands, including five ponds.

The park was primarily in agricultural use until the Luttgen family acquired the land in the late 19th century and developed the present service roads, trails, and artificial ponds. Reportedly, a small steam paddlewheeler was then kept on the largest pond and is now sunken somewhere under the park waters. A short, stone "lighthouse" still remains on one of the islands. The Starratt family then owned the estate until the 1930s when the land was acquired by Archer M. Huntington, who willed the land of the homestead he called Stanerigg for a state park.It was there that his wife, Anna Hyatt Huntington, the internationally famous sculptress, worked with clay and scaffolding in her studio. Mr. Huntington centered his activities at Stanerigg as a noted poet, Spanish scholar, art patron, and founder of the Hispanic Society.