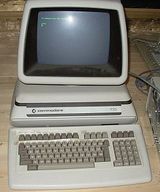 Description:
<!---->The Commodore CBM-II series was a short-lived range of 8-bit personal computers from Commodore Business Machines , intended as a follow-on to the Commodore PET series, released in 1982.

The CBM-II had two incarnations, the P series (P = personal, or, home use) and the B series (B = business use). The B series was available with a built-in monochrome monitor (hi-profile) with detached keyboard, and also as a single unit with built-in keyboard but no monitor (lo-profile). These machines were known as the "Porsche PETs" for their unique styling.

The P series used the VIC-II 40-column color video chip like the C64. It also included two standard Atari-style joystick ports. The 6509 CPU ran at 1&nbsp;MHz in the P series due to the use of the VIC-II chip.

The B series used a 6545 CRTC video chip to give an 80-column "green screen" monochrome output more suitable for word processing and other business use than the VIC-II's 40-column display. Most models have the Motorola 68B45 installed which is a pin compatible variant rather than the MOS 6545A1 2&nbsp;MHz part. On the B series the 6509 CPU ran at 2&nbsp;MHz.

Features common to both the P and B series included an MOS Technology 6509 CPU, an enhanced version of the venerable 6502, that was capable of addressing up to 1 megabyte of RAM via bank switching (however, no CBM-II model came with more than 256 kilobytes of RAM, 1/4 megabyte). The sound chip was the 6581 SID,...
Read More