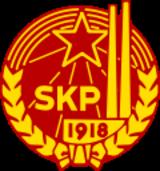 The party has been officially registered since 1997. In the 1980s, when the opposition and the organizations it controlled were expelled from the SKP led by Arvo Aalto, the SKPy, however, chose not to register since they considered themselves the real SKP and claimed Aalto had illegally stolen the party.

The opposition inside SKP

The internal conflict of Finnish communists began in the mid-1960s, when the party, led by the new chairman Aarne Saarinen, began to modernize the party line. A minority of the party cadre didn't accept this and they accused the SKP leadership of being revisionist. SKP didn't break up in the 1960s and the party was formally united until the mid-1980s. After the 20th party congress in 1984 things, however, changed as Arvo Aalto was elected chairman, after which the opposition didn't participate in (or was left out of) the SKP central committee. The opposition, which was also known as “taistoists”, called supporters of Aalto “axe liners”.