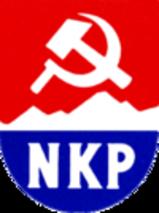 Description:
The Communist Party of Norway () is a political party in Norway without parliamentary representation. It was formed in 1923, following a split in the Norwegian Labour Party. The party played an important role in the resistance to German occupation during the Second World War, and experienced a brief period of political popularity after the war. However, after the onset of the Cold War its influence steadily declined. Since the mid-1970s the party has played a marginal role in Norwegian politics. They are against the EU and other organizations the party view as neoliberal.

The Norwegian Labour Party (DNA) under the leadership of Martin Tranmæl had joined the Communist International at the time of its formation. However, DNA was by no means ready to evolve into a Bolshevik party on the lines that the International required. Moreover, Tranmæl was strictly opposed to ComIntern involvement in internal DNA affairs. At a national conference held in November 1923 the DNA decided to leave the International.

During that conference the pro-ComIntern elements gathered to constitute a new party, the Communist Party of Norway. The new party was founded on 4 November 1923. The founders of NKP came mainly from the youth league of DNA, with leaders such as Peter Furubotn, Eugène Olaussen and Arvid G. Hansen. The majority of the youth league followed them in joining NKP.