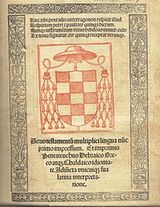 Description:
The Complutensian Polyglot Bible is the name given to the first printed polyglot of the entire Bible, initiated and financed by Cardinal Francisco Jiménez de Cisneros (1436-1517). It includes the first printed editions of the Greek New Testament, the complete Septuagint, and the Targum Onkelos. Of the 600 printed, only 123 are known to have survived to date.

With the rise of the printing press in the 1450s, the Bible could be propagated much more efficiently. At great personal expense, Cardinal Cisneros acquired many manuscripts and invited the top religious scholars of the day, including Hernán Nuñez, to work on the ambitious task of compiling a massive and complete polyglot "to revive the languishing study of the Sacred Scriptures." The scholars met in the city of Alcalá de Henares (in Latin, Complutum), at the Cardinal's own University of Alcalá. Work on the project began in 1502 under the direction of Diego Lopez de Zúñiga, and continued there for fifteen years.

The New Testament was completed and printed in 1514, but its publication was delayed while work on the Old Testament continued, so they could be published together as a complete work. In the meantime, word of the Complutensian project reached Desiderius Erasmus in Rotterdam, who produced his own printed edition of the Greek New Testament. Erasmus obtained an exclusive four-year publishing privilege from Emperor Maximilian and Pope Leo X in 1516. Erasmus' text became known as the Textus......
Read More