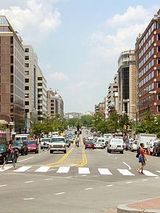 Description:
Connecticut Avenue is a major thoroughfare in the Northwest quadrant of Washington, D.C., and suburban Montgomery County, Maryland. It is one of the diagonal avenues radiating from the White House, and the segment south of Florida Avenue was one of the original streets in Pierre Charles L'Enfant's's plan for Washington.L'Enfant identified himself as "Peter Charles L'Enfant" during most of his life, while residing in the United States. He wrote this name on his (Washington, D.C.) and on other legal documents. However, during the early 1900's, a French ambassador to the U.S., Jean Jules Jusserand, popularized the use of L'Enfant's birth name, "Pierre Charles L'Enfant". (Reference: Bowling, Kenneth R (2002). Peter Charles L'Enfant: vision, honor, and male friendship in the early American Republic. George Washington University, Washington, D.C. ISBN 978-0-9727611-0-9). The United States Code states in : "(a) In General.&mdash;The purposes of this chapter shall be carried out in the District of Columbia as nearly as may be practicable in harmony with the plan of Peter Charles L'Enfant." The National Park Service identifies L'Enfant as and as on its website.