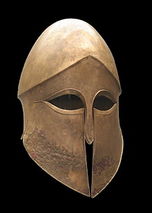 Description:
The Corinthian helmet originated in ancient Greece and took its name from the city-state of Corinth. It was a helmet made of bronze which in its later styles covered the entire head and neck, with slits for the eyes and mouth. A large curved projection protected the nape of the neck. It also protected the cheek bones, which Greeks adored.

Out of combat, a Greek hoplite would wear the helmet tipped upward for comfort. This practice gave rise to a series of variant forms in Italy, where the slits were almost closed, since the helmet was no longer pulled over the face but worn cap-like. Although the classical Corinthian helmet fell out of use among the Greeks in favour of more open types, the Italo-Corinthian types remained in use until the 1st century AD, being used, among others, by the Roman army.

Apparently (judging from artistic and archaeological evidence) the most popular helmet during the Archaic and early Classical periods, the style gradually gave way to the more open Thracian helmet, Chalcidian helmet and the much simpler pilos type, which was less expensive to manufacture and did not obstruct the wearer's critical senses of vision and hearing as the Corinthian helmet did. Numerous examples of Corinthian helmets have been excavated, and they are frequently depicted on pottery.

The Corinthian helmet was depicted on more sculpture than any other helmet; it seems the Greeks romantically associated it with glory and the past. The Romans also revered...
Read More