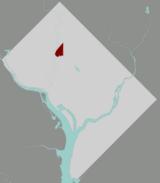 Description:
Crestwood, which forms part of the residential area known as the Gold Coast on upper 16th Street NW, is an entirely residential neighborhood located in Northwest Washington, D.C. and bordered on three sides by Rock Creek Park. It is known for its affluent, educated and majority black population. Heading north from the White House on 16th Street, Crestwood is among the first neighborhoods that features single-family homes and lawns.

Just to the north, residents can take advantage of the Carter Barron Amphitheatre and William H.G. FitzGerald Tennis Center. The amphitheatre hosts concerts and many free cultural events during the spring and summer, and the Legg Mason Tennis Classic is played at the Tennis Center next door. Crestwood is centrally located on 16th Street, being about fifteen minutes by car from both the K Street business district and downtown Silver Spring, Maryland.

The closest Metro stations are Georgia Avenue-Petworth and Columbia Heights on the Green Line and Van Ness-UDC on the Red Line. Buses run regularly on 16th Street to Silver Spring to the north and government offices, downtown stores and the National Mall to the south.