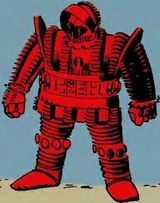 Description:
The Crimson Dynamo (Russian: Красное Динамо, ) is the name of several fictional characters in the Marvel Comics Universe, most of whom have been supervillains. The various Crimson Dynamos have been powered armor-wearing Russian or Soviet agents who have clashed with the superhero Iron Man over the course of his heroic career. The original Crimson Dynamo first appeared in Tales of Suspense #46 (Oct. 1963).

The first Crimson Dynamo was also the creator of the armor: Professor Anton Vanko. A Soviet scientist of Armenian birth with a Ph.D in Physics, Vanko was the world's foremost expert on electricity. At the behest of the Soviet government, he built a powered exoskeleton capable of performing incredible feats; the Crimson Dynamo armor allowed Vanko to generate and control electricity in all of its forms, allowing him to fire devastating bolts of lightning and fly using electromagnetic propulsion.

As the Crimson Dynamo, Vanko was tasked by the Russian government with defeating Iron Man, his American counterpart, in battle.Tales of Suspense #46 After losing to Iron Man, Vanko defected to the United States out of fear that his superiors would kill him for failing. Vanko began to work for Tony Stark as one of his chief scientists. Eventually, the two became friends, and Vanko developed pride and admiration for his new home. Unfortunately, soon the Soviets came for Vanko, just as he predicted. The KGB sent their top...
Read More