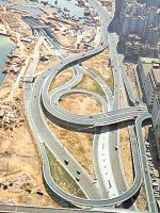 Description:
The Cross-Harbour Tunnel (abbreviated CHT or XHT) is the first tunnel in Hong Kong built under water. It has become one of the most congested roads (mainly towards Hong Kong Island direction) in Hong Kong and the world. The tunnel was constructed using the Immersed tube method.

Constructed by a private company and operated under a 30-year franchise, the 1.8&nbsp;km-long tunnel crossing opened in 1972, providing the first road link between Kowloon and Hong Kong Island; Cross-harbour vehicular traffic depended on ferries before the tunnel was built.

The tunnel links the main financial and commercial districts on both sides of Victoria Harbour, connecting Kellett Island (a former island now connected to Hong Kong Island by reclamation), Hong Kong Island with a reclaimed site at Hung Hom Bay, Kowloon. The toll plaza is located at the Hung Hom end of the tunnel, and has 14 toll booths.

It was administered by The Cross-Harbour Tunnel Company Ltd until August 1999, when the operation franchise agreement expired and the government assumed control.

Although other road tunnels, the Eastern Harbour Crossing and Western Harbour Crossing, have been built across the Victoria Harbour to divert traffic from the Cross-Harbour Tunnel, traffic congestion has not improved. Two reasons include the less convenient locations of the other two tunnels compared with the Cross-Harbour Tunnel, and more importantly the control of new tunnels by the powerful state-owned......
Read More