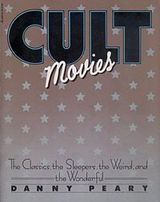 Description:
Cult Movies is a 1981 book by Danny Peary, consisting of a series of essays regarding what Peary described as the 100 most representative examples of the cult film phenomenon. The films are presented in alphabetical order, with each chapter featuring a story synopsis for the covered title, Peary’s response to the film, production and release details, and a brief selection of contemporary critical reviews.

In the book’s Foreword, Peary notes that out of the thousands of movies that have been made, “only an extremely small number have elicited a fiery passion in moviegoers that exists long after their initial releases.” Cult movies are defined by Peary as “special films which for one reason or another have been taken to heart by segments of the movie audience, cherished, protected, and most of all, enthusiastically championed.” He explains that “the typical Hollywood product” never attains cult status since all viewers perceive these average films in more or less the same way, with no real disagreement as to the film’s quality. But cult films “are born in controversy, in arguments over quality, theme, talent and other matters. Cultists believe they are among the blessed few who have discovered something in particular that the average moviegoer and critic have missed – the something that makes the pictures extraordinary.” Peary, Danny. Cult Movies, Delta Books, 1981. ISBN 0-517-20185-2

The book has been...
Read More