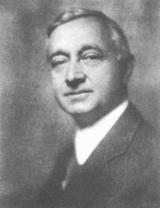 Description:
Cyrus Stephen Eaton (December 27, 1883 &ndash; May 9, 1979) was a Canadian-born investment banker, businessman and philanthropist in the United States, with a career that spanned seventy years.

For decades one of the most powerful financiers in the American midwest, Cyrus Eaton was also a colorful and often-controversial figure. He was chiefly known for his longevity in business, for his opposition to the dominance of eastern financiers in the America of his day, for his occasionally ruthless financial manipulations, and for his outspoken criticism of America’s Cold War brinkmanship. He funded and helped organize the first Pugwash Conferences on World Peace, in 1955.

Cyrus Eaton was born on a farm near the village of Pugwash in Cumberland County, Nova Scotia, Canada, in 1883. a direct descendant of John, who left Connecticut in 1761 to join the so-called New England Planters who responded to a call to re-populate farmlands in the English colony of Nova Scotia left uninhabited by the expulsion of the Acadian French. On his mother’s side, Cyrus was a descendant of...
Read More