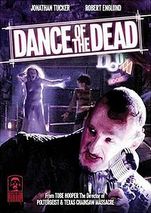 Dance Of The Dead (Masters Of Horror)

Dance of the Dead (Masters of Horror)

Description:
Dance of the Dead is the third episode of the first season of Masters of Horror. It originally aired in North America on November 11, 2005. Richard Christian Matheson adapted the episode from a short story of the same name by his father, Richard Matheson. Smashing Pumpkins frontman Billy Corgan scored this episode.

In 2008, terrorists developed a biological weapon called "Blizz". They used this weapon in local weather patterns in the United States. As it falls from the sky, it will instantly burn any living thing it touches. At her seventh birthday party, young Peggy (Emily Graham) watched as her friends were killed by Blizz.

Ten years later, America has been ravaged by the effects of World War III. The death count continues to rise in this dark and bleak future and some states simply no longer exist. Peggy (Jessica Lowndes) is now a teenager, ignorant of the world outside of her mother's diner. She has lost both her father and her sister, Anna, and now depends on her mother, Kate (Marilyn Norry). One day, Peggy meets biker/drug addict Jak (Jonathan Tucker) and his two "friends", junkies Boxx (Ryan McDonald) and Celia (Lucie Guest). The three are into some shady dealings with a nightclub called The Doom Room, located in the town of Muskeet.

Kate warns Peggy that "everything the people of Muskeet do is a goddamn trick", and although she's afraid to disobey her mother, Peggy sneaks out with Jak in the middle of the night to the Doom Room with...
Read More