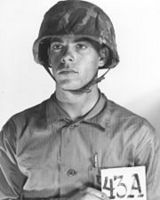 Description:
Daniel Paul Matthews (December 31, 1931 &ndash; March 28, 1953) was a United States Marine Corps sergeant who was posthumous awarded the Nation’s highest decoration for his single-handed attack on an enemy machine gun nest which had prevented the evacuation of a wounded comrade. He was the 41st Marine to receive the Medal of Honor for heroism in Korea.

Daniel Paul Matthews and his twin brother were born in Van Nuys, California, on December 31, 1931. He was a member of the high school track and football teams before he left school in 1948 to work as a concrete-mixer operator for C.W. Organ, a Los Angeles contractor. He enlisted in the Marine Corps on February 21, 1951, and after completing recruit training at Marine Corps Recruit Depot San Diego that April, was promoted to private first class and assigned to Camp Pendleton. While serving there with the 6th Infantry Training Battalion and the 1st Battalion 3rd Marines, 3rd Marine Division, he was promoted to Corporal in March 1952 and to sergeant in July 1952.