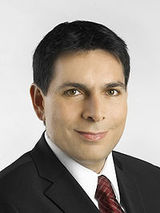 Description:
Danny Danon (, born 8 May 1971) is an Israeli politician who serves as a member of the Knesset for Likud. He is chairman of World Likud and Chair of the Knesset Committee for Aliya (imigration), Absorption and Diaspora Affairs.

Danon was born in Ramat Gan, Israel, to Joseph and Yoheved Danon. He attended Blikh high school and participated in the Betar youth movement. Danon gained a Bachelors degree in International Affairs, and Masters degree in Public Policy from the Hebrew University of Jerusalem. After his national service in the IDF (1994–1996), Danon was sent by the Jewish Agency to Miami.

In 1996 he was appointed assistant to Likud MK Uzi Landau. Later on he was appointed the Chairman of the World Betar organization for a few years. Prior to the 2006 elections, Danon won 23rd spot on Likud's list in the party primaries. However, the party won only 12 seats, and Danon did not enter the Knesset.

In June 2006, after beating MK Yuval Steinitz, Danon was elected Chairman of the World Likud organization. Danon was active against Prime-Minister Ariel Sharon's disengagement plan during the referendum conducted by the latter in the Likud party's central committee.

In July 2007 Danon, described as one of Binyamin Netanyahu's biggest critics from within the Likud, declared his candidacy for the Likud leadership election....
Read More

Member Of The Knesset
No messages found
Suggested Pages