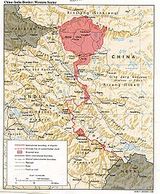 Daulat Beg Oldi lies at the easternmost point of the Karakoram Range in a cold desert region in the far north of India, just 8&nbsp;km south of the Chinese border and 9&nbsp;km northwest of the Aksai Chin Line of Actual Control between China and India. Other than Siachen Glacier military bases, it is India's northernmost built-up area.The nearest inhabited town is Murgo to the south, which has a small population of Baltis who primarily depend on apricot farming and yak rearing.

The government in 2001 first announced plans to construct a motorable road from Leh to its end at Daulat Beg Oldi.

Temperature plummets as low as -30 C in the winters. The weather deteriorates frequently with strong icy winds lashing much of DBO. DBO has very little if any vegetation or wildlife. Communication is possible only through INMARSAT (satellite) phones.

The place is named after Daulat Baig Oldi, a 16th century Yarkandi nobleman who is supposed to have died at this place after descent from the Karakoram Pass, which is 17 kilometers to the northwest on the Indo-Chinese border. This route was used by caravans of traders traveling between India and Central Asia.It used to...
Read More